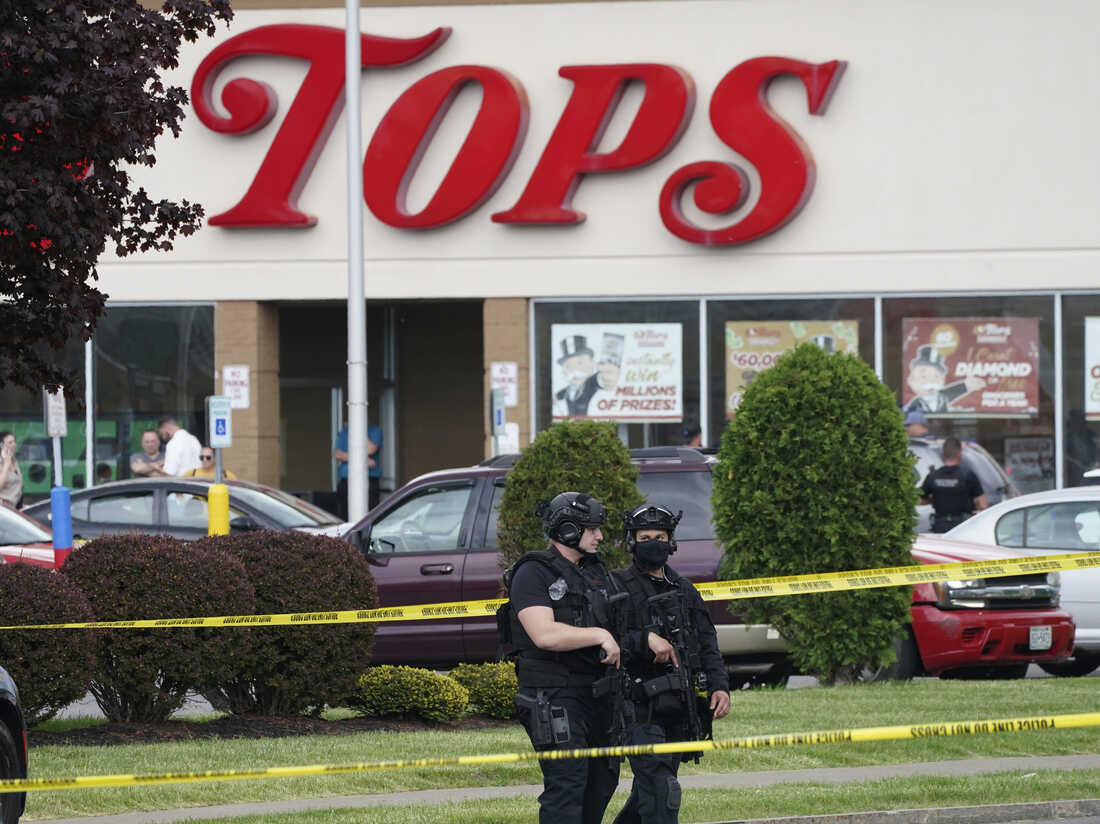 Police secure an area around a supermarket where several people were killed in a shooting, Saturday, May 14, 2022, in Buffalo, N.Y.

Police secure an area around a supermarket where several people were killed in a shooting, Saturday, May 14, 2022, in Buffalo, N.Y.

ALBANY, N.Y. — New York’s new law barring sales of bullet-resistant vests to most civilians doesn’t cover the type of armor worn by the gunman who killed 10 people at a Buffalo supermarket, a gap that could limit its effectiveness in deterring future military-style assaults.

During the May 14 attack, Payton Gendron wore a steel-plated vest, an armor strong enough to stop a handgun round fired by a store security guard who tried to halt Gendron’s rampage.

A law hastily enacted by state lawmakers after the attack restricts sales of vests defined as “bullet-resistant soft body armor.”

Soft vests, which are light and can be concealed beneath clothing, can be effective against pistol fire. Vests carrying steel, ceramic or polyethylene plates, which can potentially stop rifle rounds, aren’t explicitly covered by the legislation.

That has left some retailers confused about what they can and can’t sell — and lawmakers talking about a possible fix.

“I know you said soft vests, but what about hard armor plates, plate carriers, or armors that aren’t vests, but clothing that provide protection. Is that also prohibited? It is so vague,” said Brad Pedell, who runs 221B Tactical, a tactical gear and body armor store in New York City. He said his store tends to sell more hard-plated armor than the soft type being banned.

With the toughest armor still allowed to be sold, “I’m not convinced that this legislation is very meaningful,” said Warren Eller, a public policy professor at the John Jay College of Criminal Justice.

Assemblymember Jonathon Jacobson, a lead sponsor of the legislation, told The Associated Press he would “be glad to amend the law to make it even stronger.”

New York Gov. Kathy Hochul, a Democrat, is also aware of the need for changes, her office said.

“Governor Hochul was proud to sign the groundbreaking new law passed by the legislature to restrict sales of body armor, and will work with the legislature to expand the definitions in the law at the first available opportunity,” it said.

Nationwide, there are few limits on sales of body armor. Before New York’s law passed, Connecticut had one of the few restrictions. It only allows people to buy it from dealers in person, not via mail order.

Pedell says many customers at his New York City store buy the armor for their own protection.

“It’s disappointing because residents are just scared, and they come to us because they are scared, and we offer help that makes them feel more confident, that they won’t get stabbed or injured or potentially killed,” Pedell said. “The fact (lawmakers) are taking that away, for whatever purpose they have in their minds, I find that really sad and unnecessary and morally wrong.”

New York’s ban is aimed at stopping criminals from gaining an advantage over peace officers, or security guards like Aaron Salter, who was killed trying to stop the gunman’s racist attack on the Buffalo supermarket.

Of the shooters who killed four or more people in a public space since 1966, 12% wore body vests, said sociologist James Densley, a co-founder of The Violence Project, a nonprofit think tank with a database on mass shootings.

New York’s law restricts sales of soft bullet-resistant vests to people who work in law enforcement and the military, plus people in certain other professions that require protective gear. The list of what types of jobs qualify someone to buy armor, and which don’t, is still to be determined by state officials.

The Department of State in New York said in an emailed statement that officials are reviewing the new law and plan to develop regulations for eligible professions that require the use of a body vest.

The leaders of the Deadline Club, the New York City chapter of the Society of Professional Journalists, had urged Hochul to veto the bill citing concerns about whether it would make it tough for news organizations to buy armor for journalists who work in conflict zones or cover civil unrest in the U.S.

“I know a number of photographers who have worn protective gear as a precautionary measure while out in situations that may get violent,” said Peter Szekely, the group’s advocacy chair.

New Yorkers are still allowed to own body vests and purchase them in other states, though Jacobson, a Democrat, said he would work to eliminate that option during the next Legislative session in January.

“We wanted to get things done as quickly as possible, and not let the perfect get in the way of the good,” said Jacobson. “Like all laws in New York State, we always try to make them better in the future. Of course we’ll try to make this law better.”