Skip to content (Press Enter)
HomeLEGALUvalde officials use a legal loophole to block the release of records : NPR 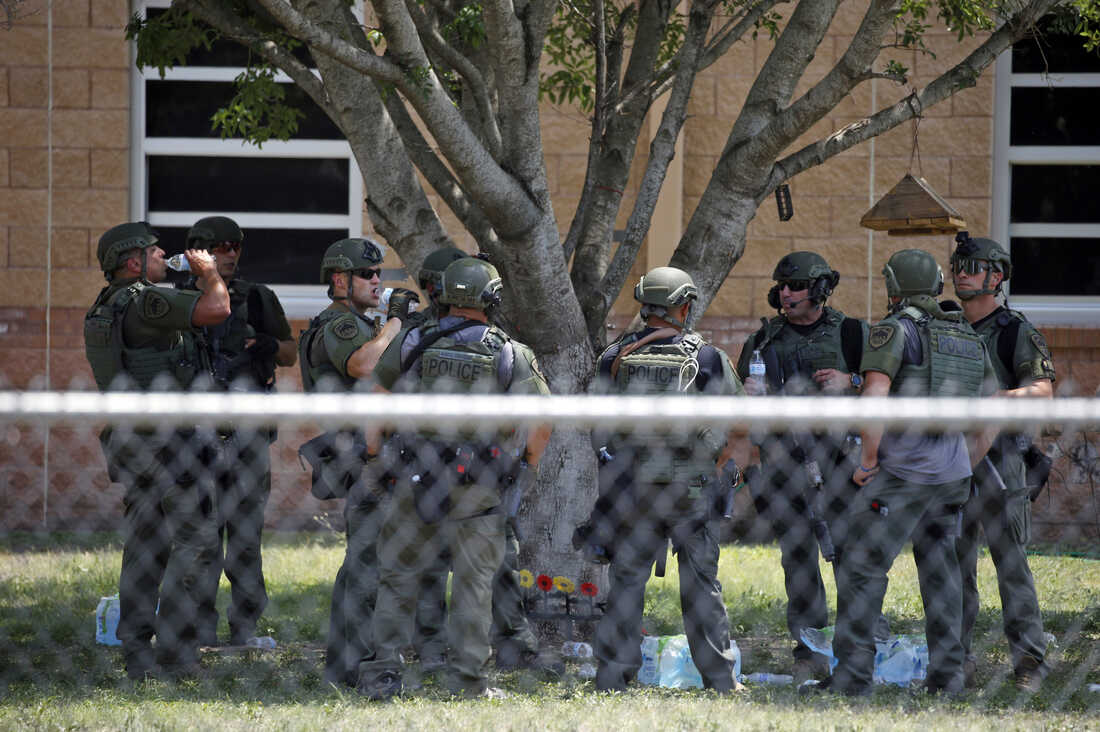 Law enforcement personnel stand outside Robb Elementary School following a shooting on May 24 in Uvalde, Texas. When the gunman arrived at the school, he hopped its fence and easily entered through an unlocked back door, police said.

Law enforcement personnel stand outside Robb Elementary School following a shooting on May 24 in Uvalde, Texas. When the gunman arrived at the school, he hopped its fence and easily entered through an unlocked back door, police said.

Uvalde city officials are using a legal loophole and several other broad exemptions in Texas to prevent the release of police records related to last month’s mass shooting that left 19 children and two teachers dead, according to a letter obtained by NPR in response to public information requests filed by member station Texas Public Radio.

Since the May 24 shooting at Robb Elementary School, law enforcement officials have provided little and conflicting information, amid mounting public pressure for transparency. The Texas Department of Public Safety, which is leading the state investigation, previously said that some accounts of the events were preliminary and may change as more witnesses are interviewed.

The City of Uvalde has hired a private law firm to make its case, which cited the “dead suspect loophole,” to deny the release of information because the gunman died in police custody. The legal exception bars the public disclosure of information pertaining to crimes in which no one has been convicted. The Texas Attorney General’s Office has ruled that the exception applies when a suspect is dead.

The maneuver has been used repeatedly by Texas law enforcement agencies to claim they’re not required to turn over the requested information because a criminal case is still pending, even though the suspect is dead.

The loophole was established in the 1990s to protect people who were wrongfully accused or whose cases were dismissed, said Kelley Shannon, executive director of the Freedom of Information Foundation of Texas.

“It is meant to protect the innocent,” Shannon said, but in some cases “it is being used and misused in a way that was never intended.”

In the obtained letter, dated June 16, the city of Uvalde’s lawyer asks Texas Attorney General Ken Paxton to rule on which public records the city is required to release, a common practice in the state.

“The City has not voluntarily released any information to a member of the public,” Cynthia Trevino, a lawyer for the firm Denton Navarro Rocha Bernal & Zech, wrote to Paxton.

Among the 148 public records requests Trevino said the city has received, reporters are pressing for the disclosure of body camera footage, 911 calls, criminal records, emails and text messages and other information.

The city and its police department are arguing against the release of the requested records, citing the following reasons: the city is being sued, some individuals’ criminal history records could include “highly embarrassing information”; some of the information could reveal police “methods, techniques, and strategies for preventing and predicting crime,” could cause “emotional/mental distress,” “is not of legitimate concern to the public,” could subject city employees or officers to “a substantial threat of physical harm,” and violates individuals’ common-law right to privacy. City officials have also refused to release more details, reasoning that it would interfere with the ongoing investigation by the Texas Department of Public Safety, Uvalde County’s district attorney and the FBI.

It’s unclear from the lawyer’s letter which legal protections are being applied to argue the release of which specific records.

There is a slew of questions that, if answered, could help prevent another shooting or may provide some closure to victims’ families. Among them: Why did it take police over an hour to confront the gunman in the classroom where he was killing children?